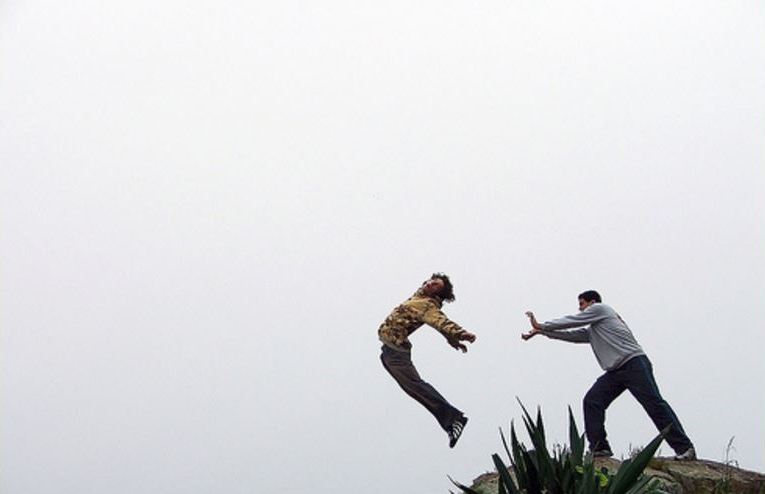 Before birth was existence.  You’ll call it pre-existence.  I won’t: Such is the nature of this argument.

Interlaced are two distinct senses of nature: The phenomena of physical laws that coexist with the set of attributes that make an entity.

Wherein Gail admits to the earthly constitution of the social construct, Rick embraces.

Yesterday  — January 10, 2017 — Rick confesses:  “Gail, I think I was trying to protect you. You did nothing wrong.  It really is nothing worth talking about.”  Rick feeling anxiety lifted by mere admission of unsorted guilt.

“You called Shiloh, it.”  Rick’s anxiety resurfaces at the ridiculous statement just uttered.

“I know, she’s a dog and your attitude towards her is totally fair, but to me she’s clearly female.” Rick attempts to extinguish the anxiety felt.

“I don’t know why but referring to Shiloh as ‘it’…Let’s just call it a ‘Bloop’ or a ‘Bleep’.  Imagine a heart rate monitor, okay?  I wasn’t mad.  I wasn’t disappointed …Not really” , Rick now accounting for the fact that he has just lied to Gail.

“No, you were upset.  You were furious with me.  And you didn’t let me know.”  Gail says in a calm and nursing tone of voice, elevating Rick into a stage of comfort.

“But there’s no real logic or reason for feeling this way!  It’s stupid to feel this way.  So, you know, it’s all on me” : Rick says.

Gail asks:  “Remove the logic and the reason for the moment.  Just acknowledge how you feel.  Allow the process to work itself out.  You were holding this in and delaying resolution, why?”

Rick:  “I don’t know.  I guess …I know Shiloh doesn’t identify with a gender.  But, I mean, c’mon – she’s clearly all girl.  She’s groomed like one.  Okay, I admit it, maybe I dress her in such a way that she’s not too …Well, I guess Shiloh can be mistaken as androgynous.  I don’t want to ‘out’ myself.”  The self-preservation Rick bitterly fought for while forgoing his humanity no longer feels dignified.

“But Shiloh’s shirt, there’s some pink on the army print –PINK!  I bought some bling for the collar to fem-her-up.  I get a little taken back when people say, ‘Oh how cute!  What is it, a boy or girl dog?’  But …” : Silence fills the air.

And with the delivery of Gail’s friendship: “But …What? …If you doll her up you’ll feel like you’ll be outing yourself?” : Gail asks.  The care within Gail’s voice outweighing the pain of the question.

“Yeah, I don’t want to ‘out’ myself by walking her.  But I want Shiloh to be true to herself.” : Rick says.

A breathing stillness: “No, what you really want is to be true to yourself.  And Shiloh is an extension of that self.” : Gail says.  It was a curious concept, the expression by way of a dog.

“Look – there’s a catch 22!  If she’s all foofoo’ed up I’m playing into the stereotype.  You know, I thought of an awesome cover story, if people notice Shiloh’s bling I’ll say she isn’t my dog.” : Rick, speeding words as if he has figured out a proper solution.

“Tell me, do you still associate gay with femininity?” : Gail, unhesitatingly continues to ask.  A subject that’s been visited.

Then Gail’s voice in quietly yet assuring manner, “You know things have changed so much.  People don’t necessarily associate gay with femininity.”

And yet – Rick – feeling his own congregational experience (perhaps recognizing being at a place of regression) begins to feel something primal from within, a feeling that’s beyond anxiety: The feeling of shame.

There’s this fucking agonizing vulnerability, a lack of dare, and a feeling of total worthlessness.

Sensations unraveling at the connection to shame.  Feelings that there’s something wrong with Rick, something so wrong that if other people witnessed would no longer accept him.

Rick, bearing such emotion makes it hard for him to connect to other people.

Rick, restricted by such feelings makes it even harder to connect with myself: To connect to a fuller life, truth be said.

Somehow the shame Rick felt when he was young slipped right back in. …The Fuck!

The anguish is really pain: At this moment, Rick can’t even separate the pain from emotional to physical.

And so Rick feels his chest: Rick doesn’t need reminder of the physical scar.  The touch of the once broken skin now serving as a reminder of the scaling, layered, uneven past.

There’s an anguishing quality inside Rick’s chest.  There’s something within Rick that makes for the passing or oversight of others and of opportunities seem correct.

This emotion of a once shameful existence pushes Rick and the outer world in opposing directions.

Once: The element so ever needed to serve as a reminder: To rebuild.

And so Rick is able to carry on knowing there’s hope in the form of challenge.  Rick looks onward, able to persist by the power to will an argument.

But Rick also experiences Gail; allowing her to remain.  With that, brings a moment of potency to continue the argument in a constructive manner.

Rick isn’t trying to win this argument.  To do so would mean allowing dark in place of light.

Rick is merely trying to claw his way out, using Gail for guidance.

Gail Brings On A Challenge: Examine The Emotions: Don’t Be Alone – Lost With Only Thought.

Here on down Rick is allowing emotions to resurface in tandem with reason and logic.

Rick, with his desire to reason towards tomorrow’s survive however enriched with Gail’s presence to guild emotions will attempt to designate a fuller, broader, more balanced account of psyche; by way of exploring the subject of “the nature of characterization.”

Rick holds an overbearing tendency to impose predictability onto his world.  Beyond Rick’s -at times shameful world- is a larger more overwhelming world.  And there are moments where Rick’s world must meet with the outer world.

To allow a certain degree of convergence Rick not only harnesses but also masters the practical simplification to chuck everything into broad categories; that is, checking in tools or orders of operations on one side.

However, Rick experiences anomalies or exceptions.  These anomalies or exceptions are jarring at first (some however fixed in a state of overcome), yet Rick manages to examine most to further build a category of systems: that offsets future and deeper unpredictability, i.e., shielding him from feeling shame and confusion.

Why does Rick cling onto categories, and how does Rick strike the right balance to not exclude the transcendent entity?

Albeit there are periods where Rick will catch himself or others abusing the category system for the imposition of his will or for the will of others onto him, the notion of categorization for the primary tool of power and suppression appears foolish to Rick.

For the most part, the practical simplification works well with the experience anomalies or exceptions.

Rick understands (but doesn’t always recognize) going beyond earlier learned moral constraints or traditional value systems.  And it’s that initial practical simplification so familiar and habitual for Rick that causes him to boomerang right back into his initial cultural mindset.

When Rick forgoes the reorganization into another culture mentality, Rick’s emotions revert into a state wherein he feels like a radical individual; to associate emotional reminisces of shame and guilt.

The quintessence battle of culture shifts within Rick’s psyche is the root of persistence.

The battle within Rick isn’t a result of lack intelligence, rather it’s the part of Rick’s psyche that goes very still: Sending parts of his soul away for protection.

Rick can burrow inside himself and hide knowledge of what was wrong; denying the emotion of shame and guilt.  The lost emotions that brought far too much pain were also confusing, creating an abyss within.

Rick felt ashamed to extent he stopped being a child too early.

Today the abyss is filled however resting on an uncured slab.

The abyss between the directives of Rick’s conscious mind and the execution by the unconscious: Such is Truly the nature of this argument.